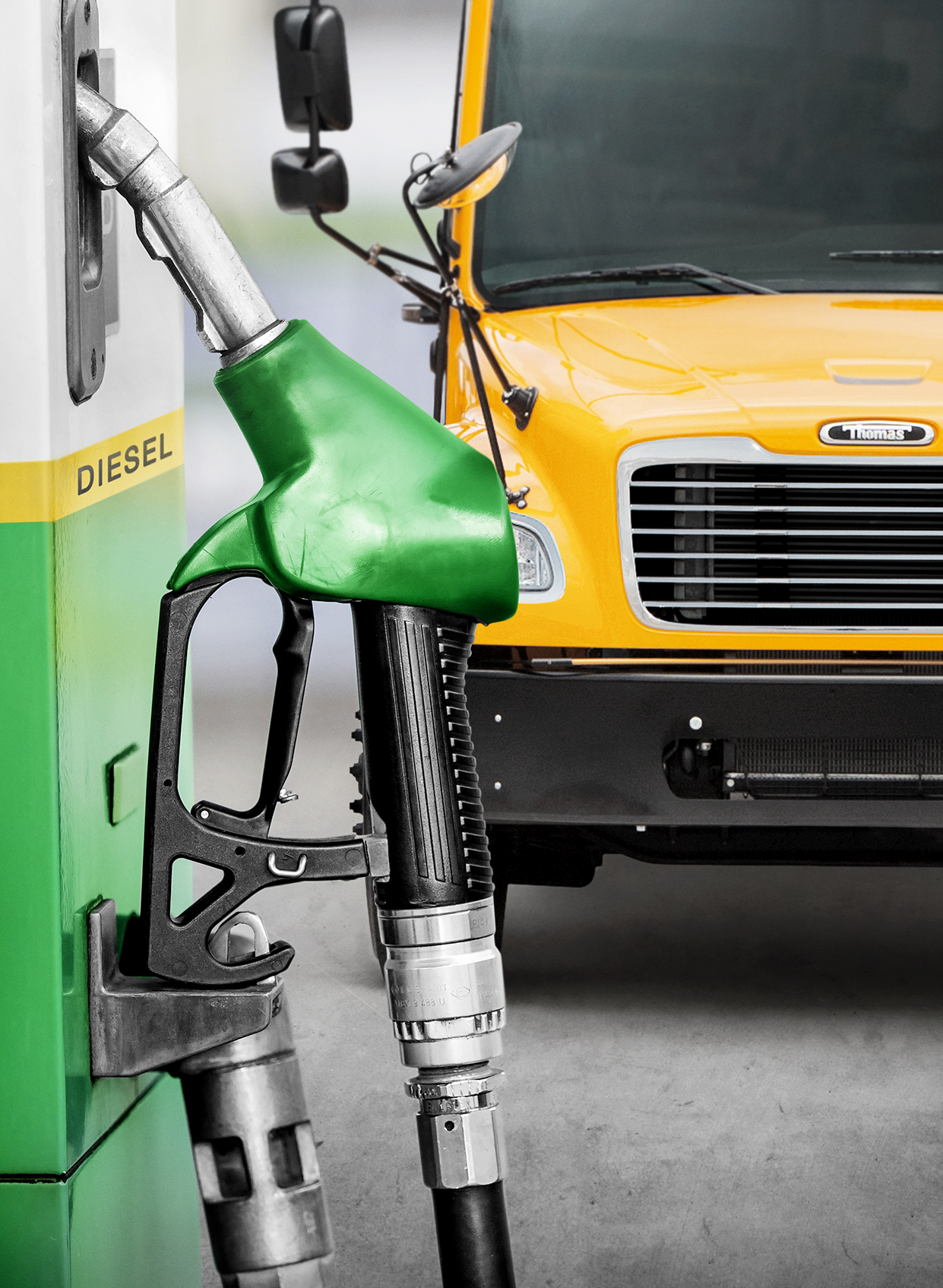 It’s an ongoing debate: which fuel type provides the lowest total cost of ownership (TCO) to districts. Opinions abound on all sides of the issue.

The more efficient the engine, the less fuel it burns and the further it travels on a single gallon of fuel. So even if one type of fuel is less expensive per gallon-equivalent (like gasoline or propane), the efficiency of that engine type may negate the savings.

Clean-diesel is the most energy-efficient fuel type, which means that it outperforms other fuels in operating range and fuel economy per gallon of fuel. On average, a clean-diesel school bus can travel approximately 510 miles on a tank of diesel vs. only 270 miles on gasoline, based on the same standard-sized fuel tanks. Newer engines, like the Detroit™ DD5™ and DD8™ diesel engines, show an additional three percent increase in fuel efficiency. This difference in range and fuel economy quickly mitigates the cost difference between gasoline and diesel fuel.

Diesel always has been and remains the most fuel-efficient engine (due to more BTUs), providing nearly 90 percent better fuel economy and a longer operating range than any other similar-sized gasoline, propane or compressed natural gas (CNG) engines. Plus, new technologies and innovations like the Detroit DD5 engine can help you achieve even greater fuel economy and lower fuel costs down the road.

Diesel engines are longer-lasting, durable, reliable and hard-working.  With a clean-diesel school bus, not only will you have peace of mind with reliable buses on the road, you’ll also save money on maintenance costs.  Today’s clean-diesel engines, like the Detroit DD5 and DD8, offer the longest service intervals in the industry with up to 45,000-mile* oil and fuel filter change intervals, which means lower ongoing maintenance costs. Plus, with new engine technology, aftertreatment issues are now a thing of the past.

Diesel engines last 15- 20 years, two to three times longer than their propane and gasoline counterparts.  Even with a lower acquisition cost, most districts will have to replace their propane or gasoline engines several times during the life of the bus. Again, once all factors are considered, diesel comes out on top.

The capital cost of a school bus is the most prominent aspect of the total cost of ownership equation. Many fleets select the cheapest bus without weighing the cost of owning that bus down the road or selling it at the end of its lifecycle. In the long run, the lowest initial cost option may not be the most cost-efficient overall.

For instance, there are vast differences in the resale value of school buses. Clean-diesel has the highest resale value in the market today. The large resale market for clean-diesel just doesn’t exist for gasoline, propane or compressed natural gas-powered buses.

When examining the TCO of your school bus purchases, challenge past assumptions, ask tough questions and keep an open mind. You may be surprised by what you learn.

Article When Converting to Electric School Buses, Choose a Partner You Can Trust Dec 10, 2019 Read More

Article The Four Most Common Drawbacks of Electric School Buses and What You Can Do About Them Oct 01, 2019 Read More

Article Save Money With Improved Fuel Economy This School Year Sep 24, 2019 Read More
Sign Up and Receive Our Newsletter